The Company of Chivalry have just returned from a trip to take part in an event at an abbey in Morimondo, the recreation of the battle of Casorate 1356.
This event is huge, including several European nations, and hundreds of re-enactors, recreating the 14C campaign camp and life. 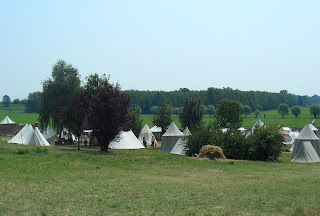 I don't do Italy every year, but this year I decided to go along. We travelled on Thursday, rest day Friday and then a 48 hour authentic event from 8pm Friday to 8pm Sunday.
This was the weirdest event I have ever attended....
We were putting up tents in sweltering heat and atrocious flies, which boded well for a hot weekend - which failed to materialise...
After a restful day on Friday eating Italian ice cream, watching the other groups arrive and lazing in the sun, I decided to raid my vodka store in the evening and managed to get stonking drunk. I don't do that very often and, combined with sunstroke, it resulted in me throwing up all night Friday and being very ill all day Saturday. It was 24 hours before I could keep anything down and I slept, on and off, for almost 30 hours...
Being ill meant I missed the last decent day, weather-wise, and the Saturday night battle. 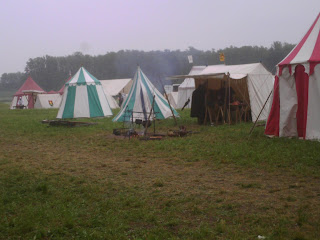 With the rain almost non-stop and the Sunday battle cancelled, groups started to pack up and leave - we had to stay due to contractual obligations and flight bookings. 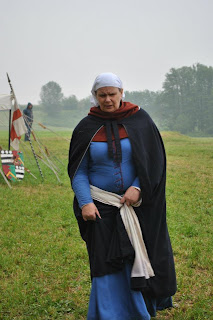 This is me making my way through the camp in the miserable rain in kit.
There were bright moments, such as being annexed by the Danes and having our lovely cook Liz kidnapped! I am now a proud citizen of Dane-Gland!
We spent some time teaching our Swedish friend Patric the intricacies of Bristolian speech.
By Sunday night after the exodus, there was the Company of Chivalry and a handful of other tents.
We had also heard that there had been an earthquake in Italy in the early hours of Sunday, which was felt in the camp and made the Abbey shake. My first earthquake!
Sunday night was hell - the rain continued, the wind rose to a screaming gale and threatened all the tents. I was up twice in the night repegging our tent and helping with the other tents. The wind was just pulling the tents out of the ground. Even one of the portaloos shifted in the storm.
So on Monday it was a weary and very wet Company striking a soaking camp and loading the lorry for it's return to the UK.
Our sodden Company then made it's exhausted way to Malpensa airport to await our late flight home.
It's amazing what you do when boredom gets the better of you. The girls decided to work on the Dane-Gland flag and we had our photos taken with the Danish flag. 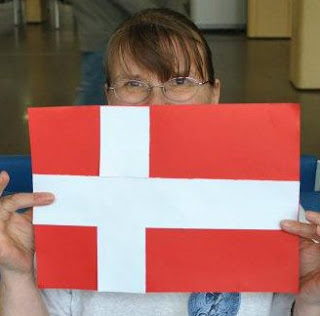 Finally, at 10pm we staggered aboard our plane, still damp and exhausted to fly home to England.