This is our Master Burley, a Knight in training.......taking a moment of peace before going into battle...... 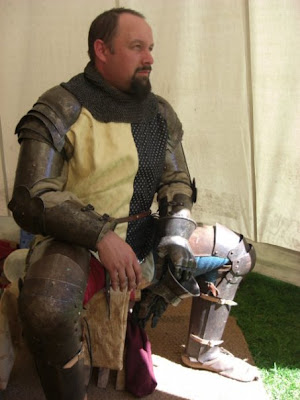 Isn't this photo fantastic?
It was taken by Burley's (aka Johno!) real life wife, the lovely Hannah. I love it - the colours of his jupon go with his battle-scarred armour and his thoughtful expression looks SO real.....one mitt in hand, working out some brilliant strategy to beat his opponent.
cq
Posted by craziequeen at 21:50 10 comments:

Back to the Field

Yesterday I joined my re-enactment group for the day to test my knee - and, to be honest, I couldn't stay away any more!
They were at the delicious Caerphilly Castle and the weather was glorious! 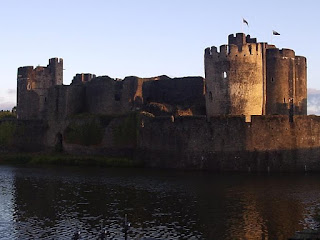 My intention was to have a day out, take lots of photos and exercise my knee. Being a re-enactor, of course, I took some kit - just in case! It took about five minutes to decide to dump the 21C and get into my kit to join the 14C........so my rucksack was tucked away (complete with camera) and I spent the day in a long dress and bare feet.
The guys seemed pleased to see me, I got lots of hugs and it almost felt like going home. The fire was lit and the the pork was roasting on the spit. The sun beat down as the lads went through the siege engine shows 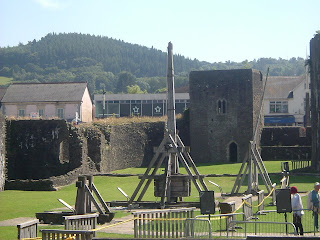 and the battle. (Siege engines; from the left - mangonel, trebuchet and perrier) The court scene in the Great Hall had some new elements and the public seemed to appreciate the shows.
It was a good day, I got to see some of my dearest friends again. Especially George, who is off to Rome shortly for six months and I'm going to miss her - but she was there, all smiles and hugs. Her husband will be around for another few weeks and then we say goodbye to him too for a while. They'll be missed in the company.
I guess I am an addict :-)
cq
Posted by craziequeen at 08:17 7 comments:

What a week - I haven't been around much. I put it down to continuing post-operative depression.

Being back at work was fun as well as a challenge; I like my colleagues and we have a laugh, but with my boss on holiday things piled up quickly, so by Monday it was a bit of a slog.

On Tuesday I got into lots of physical activity - walking across site, lots of standing around and then some lifting and carrying in the afternoon to organise my storeroom. All this put new pressure on my knee and overnight Tuesday night it swelled and became very painful.

On Tuesday evening I went with Cyberkitten, BionicDwarf and SleepyPete to see the new Star Trek. Oh, my, that movie has split the group and we have argued about it since. Cyberkitten hated it, the Bionic One and the Sleepy One saw the flaws but enjoyed it nonetheless, and I thought it a cracking way to pass a couple of hours (whisper: although the lad playing Kirk annoyed the crap outta me!).

On Wednesday I realised I had overdone things as I struggled to walk on my knee. That called for a slowdown and I took a couple of days sick while I rested my knee with a new respect.

On Friday it was back to work and a busy long day was very profitable and I got a lot done.

As for my on-line existence, I have not been feeling much like blogging or Booking - sometimes one just doesn't feel very sociable. Even my dress and shoes sit half-completed.

Well, I got sick of these four walls and sitting 'with the affected leg elevated'. With some errands to run and a beautiful Spring day beckoning me outside I decided to stroll (gently!) into town to look at the shops to practice my mobility before going back to work on Thursday.

I remembered all the medical advice and tried to walk as evenly as possible and to keep the speed at a minimum. I was even overtaken by little old people! My knee was surprisingly good, it didn't start hurting until I was on my way home. With it elevated again this afternoon and some new pain relief, I am feeling much more positive.

One of my errands was new road tax for my little ol' jalopy. The adverts warning people to keep their legally required road tax current is strong (picture crushing cars etc) and the penalties for being stopped without it are quite steep.

So as I was a little overdue because of the convalescence, I apologised profusely at the post office - fully expecting the police to burst out and arrest me on the spot...at the very least a stern talking to from the post office representative.
'Oh, no problem at all, madam,' said the chap at the window. Nothing like a mixed message about a legally required document....

I wasn't terribly well the last couple of days. I stopped the painkillers because I was sick of feeling sick........

Once I was feeling a bit more human I dug out my renactment stuff - there are always things to do!

I basted my new overdress dress... 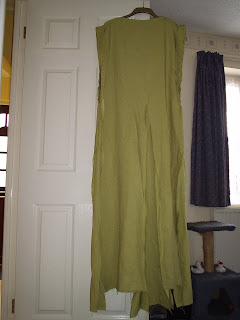 and I started on my new shoes....I cut out the shapes from a cereal box, using the guides from our resident expert.... 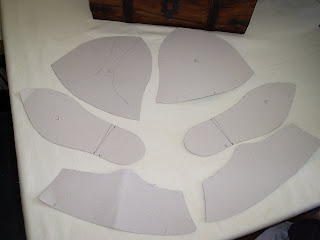 Arrange the pieces on the leather to ensure the least wastage.. 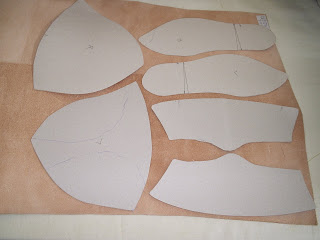 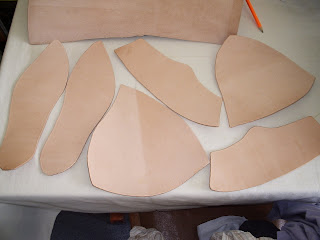 First sew the uppers together using a hidden stitch - shoe stitching was not visible in the 14C style....beeswax is essential to make the needle and thread go through the leather easier.... 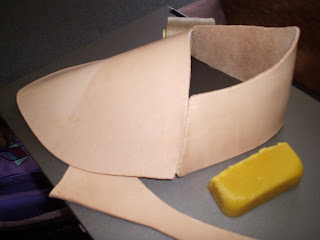 And now, before embarking on the complicated double stitching on the sole which will make the shoe shape more defined, I am taking a short break from shoemaking....

The Company of Chivalry is back in the field this afternoon for the Bank Holiday weekend and I, again, am not going. My knee is still rather weak - although it is showing signs of improvement on what it has been!