Anyone want to spend a couple of days with a sick person??

Update: MB is not going to Scotland and has been given three days special leave to be with me....

Tonight was a long awaited night out with Bobkat - I have no social life; I wait on her availability :-)

It started well; I went to buy 5 litres of oil for my little aged car and was offered a free set of screwdrivers with it - accepted!
I found the latest Alexander McCall Smith 'Mma Ramotswe' novel at a deal price - I recommend this marvellous author and his novels set in Gabarone, Botswana!
I had a nice restful cup of coffee reading my new book.

I bought the cinema tickets and met with Bob for our dinner in our usual haunt.
We had fun with the cute young Italian waiter - admittedly he spoilt it a little bit by knowing how cute he was....but it made for an entertaining meal for the two middle-aged women...and we tipped him accordingly.

Then it was movie time - we didn't expect too much from the frothy chick flick......but this film should come with a health warning! 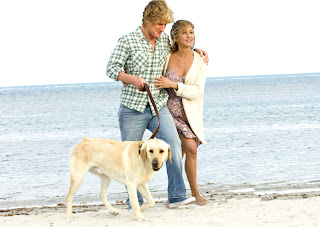 Jennifer Aniston and Owen Wilson in 'Marley and Me'.
It started off well and the story built steadily with a mix of reality and comedy, but watch out for the ending! As we collected our belongings and started to leave the cinema, there were girls sniffing into tissues and men holding their women comfortingly.
We came out thinking that the film should have been buoyed at the end in some way, but it ended on such a sad note. If you're planning to see this - take tissues!
I couldn't help but think 'Old Yeller'.....but not so dramatic.

Now I'm really annoyed with Hollywood - I sneaked the book off the shelf and looked at the ending - and it ended on the now middle-aged couple coming across a homeless dog who was the image of Marley and the words 'shall we take him home?'

Now that would have just finished the film off nicely, instead of the heartbreaking ending Hollywood assigned it.

This weekend is Mother's Day in the UK, a time to offer thanks to the mothers in our lives, and to celebrate the miracle of motherhood.
I don't like this big 'Day' simply because it is an annual reminder of my inability to have children. I know, I know; I have children in my life (most recently the little Aginoths) and have always had children around in one way or another.
But I have never been able to bear my own children and truly express my maternal instinct. My only acknowedged pregnancy ended in miscarriage and I was never able to sustain another - and 12 years ago I was diagnosed with problems that explained my barrenness.
But there is a boy in my life - well, he is a grown man, but he will always be 'my boy'. We have been friends for ten years and I love him dearly. 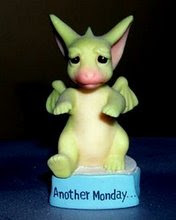 You can meet him here; his name is SleepyPete. When he heard about my problems a few years ago he hatched a plot to make me feel better each year.
Every Mother's Day I get a glorious bouquet to show how much I am still loved and appreciated despite my natural failings in the world of Motherdom. 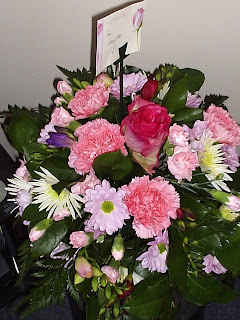 Look at the pretty flowers my boy sent me this year! :-) 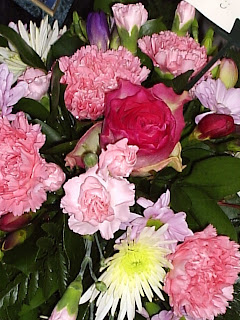 This weekend Pete is with his own family, making his mum's Mother's Day so special, but a little spirit of my boy is here with me, giving me a gentle floral hug....
cq
Posted by craziequeen at 14:11 8 comments:

On Tuesday I was called to a casualty. Being centrally based and the first aid site instructor, I am often the first person the security office call for an injury/incident. Tuesday's chap was a confusing mix of symptoms; vomiting, dizziness, pins and needles, disorientation, cold clammy skin and thready fast pulse. With no improvement after ceasing vomiting and with rest and reassurance I called for an ambulance. The chap was kept in hospital overnight with a suspected inner ear infection - which explains the mix of symptoms.

Wednesday I was teaching classes in CPR and use of automated defibrillators. My classes were a nice mix of civil servants, Air Force, Army and Navy. The first one was packed out, the second class was very 'intimate' with only half a dozen. No class too big or too small :-)

Thursday; more teaching - this time 1:2 practicals where the staff get to play with the resuscitation manikin and the training defibrillator. A long day with 16 students at two at a time.
Funniest quote this week from these magnificent volunteers;
'it's ok; I'm a defib opulator!'
I think I'll keep the word 'opulator' - it's a great word!

In addition Thursday was our nominated day for the site Cancer Awareness Day with a display with lots of leaflets and information - all organised by me around my teaching. That was in recognition that here in the UK March is National Prostate Cancer and Ovarian Cancer month.

After two and a half long days on my feet I woke up this morning to find my bad knee was very swollen and my back ached - so I arranged to take today off and spent all day with my feet up. MB was worried about the hours I put in this week, so he was pleased I took the day off and rested.

We're looking forward to a lovely sunny spring weekend this weekend - the weather is looking good and we've had a tremendous week of sunshine.....not that I saw a lot of it!

Funniest thing I heard this week. As I bemoaned my lack of chocolate (I rashly gave it up for Lent!!) one of my students quipped 'Being atheist has its benefits!' :-)

The Crazie One Went to Market and....

I took my camera and managed to juggle it with my crutches (still needed for long periods on my feet) to take a couple of photos. 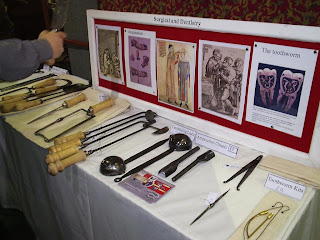 At The Original Re-Enactors Market (TORM) there was everything from dental and surgical equipment - cauterisation ladle anyone? No? Amputation chisel?

leather accessories for your Lordship's horse...modelled by some dubious plastercast horse's heads! 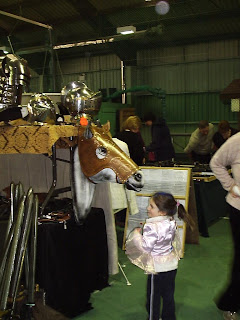 Careful, LMD, don't get too close! 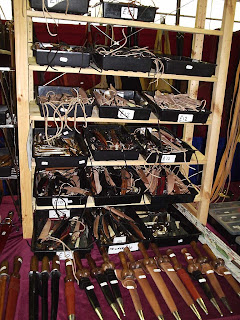 Some stalls seem to have a lot of knives, and some daggers too........trays and trays of knives for every occasion - except the one I want!

I bought some lovely stuff.......new mugs (two of); on the left is called the sherwood and the one on the right is a basic tankard. 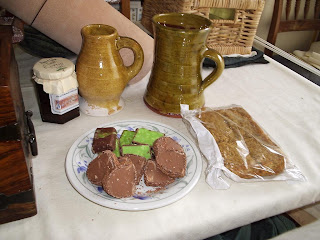 oh, and I succumbed and bought some delicious fudge, honey/oatmeal jacks and some rosehip jam. 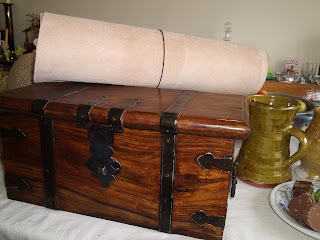 And I splashed out and bought myself a new workbox - look at my lovely box! It even looks good with my new mugs in it - with the new block of delicious beeswax I bought as well (you use it to lubricate needles for leather work). My beeswax smells wonderfully of - well - beeswax....I wish this was smellyvision! 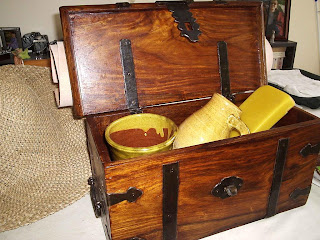 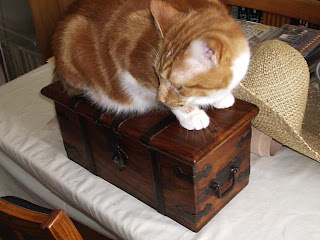 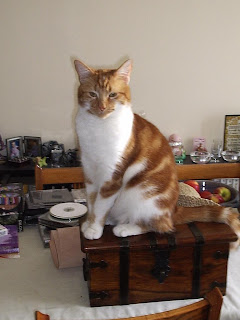 Why do I think I am not getting my new box back??

I like colours; of course, purple is my favourite as everyone knows! :-)
But, to be honest, life can creep by day by day and we just don't notice that our lives come in glorious technicolour....

Take my boys for instance; my two beautiful ginger cats.
Hehehe - enjoy this photo; a rare event indeed for them to share my lap! 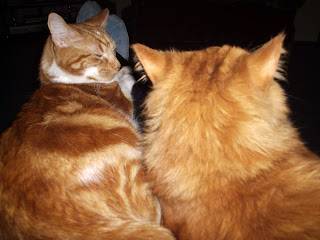 William (on the left) is a beautifully marked ginger of many shades and pure white with soulful green eyes. He has an occasional black mark, including the most adorable black spotted mouth. He even has a black beauty spot on his whiskerbed. Charlie, on the other hand, although still a ginger is a deep orange tinted with red with not a single bit of white anywhere on him. Even his eyes are the same colour as his coat - quite stunning.

I was brought to the realisation of the sheer wealth of colour in our lives that pass without a second glance while I was preparing the dinner tonight.... 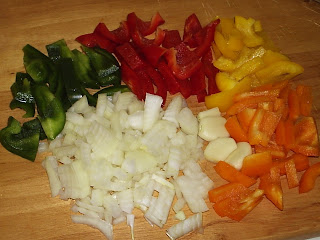 The deep green, dark red, bright orange and mixture of yellows of the peppers I was chopping for the bolognese grabbed my attention, especially when the white onion was laid beside them and added contrast. After years of pushing (sorry - encouragement!) by our mutual friend Carmi I decided to dust off my trusty point and shoot camera and photograph these vibrant colours.

Mental overload of beauty came when I put them all together and coated them in oil.... 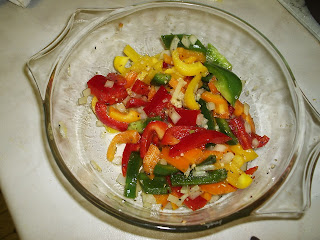 In this 'Now' life of hustle and bustle and surrounded by man-made fakery I realised how rarely we stop to absorb the everyday real colours around us created by Mother Nature.

You know, we have to admit that the British make the best commercials in the world..

Car insurance is, of course, advertised by a meerkat...called Aleksander...

any ideas on how to advertise mobile telephones...? Let's Dance..

By the way - Aleksander Orlov, the Russian meerkat, is now a national hero in the UK, with his own Facebook, his own YooToob and plans for a blog. Oh, and 'comparethemeerkat.com' is a real website - go visit here!