I went to a re-enactment affair this weekend just gone with the Aginoths. Just to test the water with my toe and see if I liked it.
As I get older I am finding it harder to find a hobby that holds my attention or concentration for more than five minutes.
So I thought maybe re-enactment might be a good hobby - different places, different things to do, and an air of the theatrical about it.

So armed with minimal personal possessions, I toddled off to Caerphilly Castle 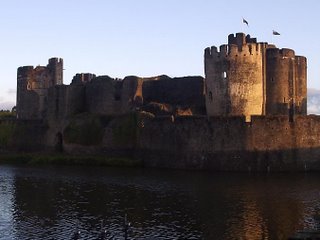 to join the Company of Chivalry for a weekend. I was kindly given sleeping space in Mistress Vic and Master Peter's tent (the one on the far right). 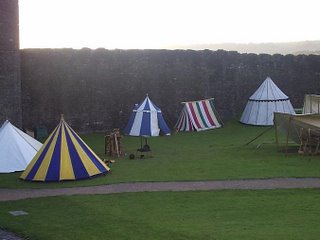 I was loaned a dress and shirt from Vintner and a belt from Sir Simon. First job - a couple of darts in the dress to minimise the 'sacking' look........... 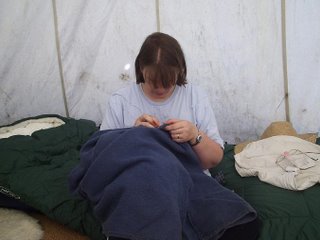 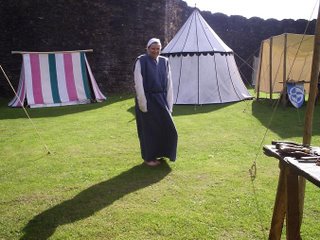 And from then on I was drawn into this mysterious re-enactment world of 1370. Mrs A and the children looked adorable: 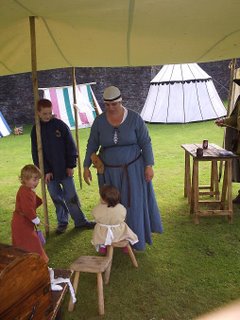 I learnt to felt mediaeval style, and I watched the whittlers making spoons. I went to see the Crime and Punishment segment, including a very realistic hanging of Martin, a treasonous thief!

The camp was split into two factions; I was with the peasants in the outer keep while the lords had their camp in the inner keep: 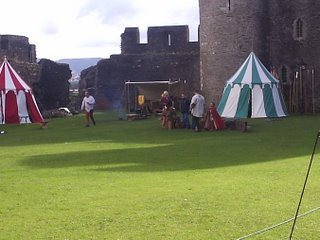 This is also where Vintner whipped us up three meals a day for the entire company... 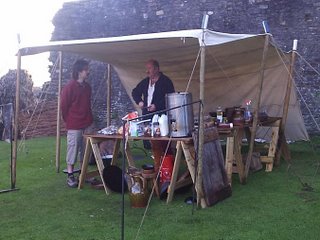 Tomorrow I'll tell you about my newly split personality and some more pictures of this lovely castle, and the storm which decimated our modest peasant market stall.

$64,000 Question: Am I going to do this again? Well, the new season starts at Easter next year, so I have plenty of time to make up my mind as regards the commitment. I am also going to a mediaeval fair with the Aginoths in October to have a look at some prices and equipment. And I need to find a skill. But, yes - I probably am going to return to the 14C!

Posted by craziequeen at 09:52

Oooooh that looks like so much fun!! I wish I'd been there.

I've heard that Caerphilly castle is an amazing place.

We visited a medieval day in Northumberland whilst on Holiday and totally loved the expereince. (Have I told you all this before?)
Certainly sound like you had a good time

very interesting! those tents are wayyyy cool looking!
i've never been to anything like that...

Haven't been here in a bit...Between Wendy & Marks visit (two visits actually, with pictures) And resting up in between...I haven't been visiting as much.
Glad you enjoyed this fora into "Acting"...allbeit back in the 14th Century...(lol) Sounds like you had a good time! I'm glad my dear CQ.

Glad you enjoyed it.