I went to see The_Prestige last night with cyberkitten and bionicdwarf.

I was really looking forward to seeing this film. The trailer and the presence of Christian Bale 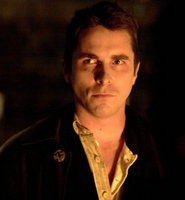 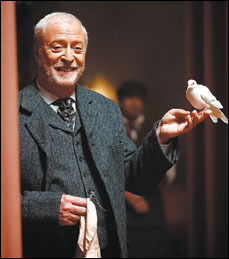 Overall the film was good, the premise was interesting (and if you're a Jackman fan it's a treat!). Christian and Michael gave good strong performances and carried the film with some weak(ish) female characterisations.

The only real let-down was the story itself. I don't know if it was meant, but the plot was see-through from very early on and the 'big reveal' at the end (along the lines of The Prestige proper) wasn't so revealing. I knew what was going on all the way through.

But it was fun getting to the end with this group of experienced and entertaining actors, albeit a bit frustrating.

You're in good company with The Prestige, and it's entertaining - as long as you don't need to be cerebrally challenged.

And the final photo from Cornwall - another shot of me and my best friend and alter ego, Cyberkitten in our favourite place, St Ives......... 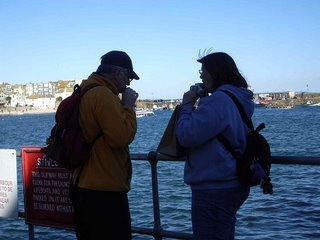 and finally - is there anyone out there who *isn't* looking forward to this? And if it's been released anywhere already.......[pokes out tongue]

Turn up the volume!!

Posted by craziequeen at 10:13

Good picture of you & Cyberkitten.

It opened yesterday..(Friday) here in the states...Robin Williams has been al over the talk shows this week touting this delightfu looking wonderment! I'm going to have to wait quite a while to see it....till the DVD hits, I'm afraid.
BTW: That "things I've never done" post, is up! Take a gander...

Happy feet should be a great picture.

Hi Hon, Glad you enjoyed the film and I liked the clip. Penguins rock and this little feel shows that!

I'll be in touch when I get back!

I can't wait to see that movie and I imagine quite a lot of dancing in the aisles!

Happy Feet is for real? That's a different sort of direction for WB isn't it?

Glad the company was great for the movie you saw.

LOVE the animation in Happy Feet... Hope that there's a story to it too... [grin].

Should walk out with a smile & humming tunes if nothing else.

I thought The Prestige was... interesting. I've just added the book to my Wish List so I can check out if its better than the film.