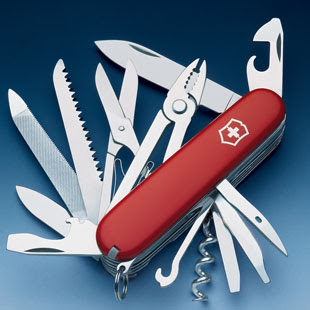 I was likened to a Swiss Army Knife this weekend by one of the Company of Chivalry. All I'm missing, apparently, is a tool to take stones out of horses hooves (chuckle).... Lord de Beauchamp (aka my friend Nick), above, called impatiently for his seamstress on Saturday.....
Um - that would be me, the only person brave (or stupid!) enough to repair his old, much worn and beaten up gambeson (padded jacket)!! That thing reeks - but is necessary to protect the fighter. Needless to say, I am constantly nagging him to buy a new one. Each time I see him, it seems he needs some emergency sewing done!
I have also be known to help him armour up (not too hard these days, I know his armour quite well), resuscitate him on a boiling hot day after a battle when he collapsed, keep his jewelry safe while he fights, and then this weekend I found myself entertaining his little boy with 'talking dogs', providing him with boiling water for his snack pots, and other little bits and pieces when called on for help.
Because I am always there, Lord de Beauchamp has christened me his 'Swiss Army Wife' for the Middle Ages.
....and people say re-enactors are nuts....[wink]
cq
Posted by craziequeen at 08:46

Swiss Army Wife...I've got to remember that one! Very clever. At least I know who to call on if I ever need a gambeson repaired.

Can I mail you my bike bags when they start to go south?

I suspect he could buy a new gambeson, but a new one not needing repair wouldn't allow him the privilege of crossing your path for some deadline-driven repairs.

Sometimes, older is better. Especially when we're surrounded by those we trust.