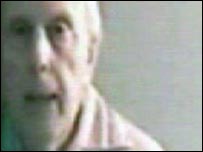 Bit of a serious one today.

The picture above is a man named Norman Kember. Your usual chap next door, married and living a quiet life in Pinner, North London. Under any other circumstances, no one outside his immediate circle would even know his name.

Following his belief in peace, Mr Kember went to Iraq to help the Iraqi people, travelling as a "gesture of solidarity" with Christian Peacemaker Teams (CPT), a Canada-based international peace group. Such a strong belief should not be belittled, although some might say it is misguided. Suffice it to say, Mr Kember is a good man who wanted to help.

He is now a hostage, captured by rebels in Iraq and is facing his own execution.

The deadline has been extended to this Saturday, and one can only hope and pray that extension means that the kidnappers really don't want to execute this innocent man and his three fellow hostages. But they are demanding all the prisoners released from US and Iraq detention in return for these four lives, so this is stalemate.

God give Mrs Kember strength and succour in this terrible time. And may the hostage-takers see the madness and release these four innocent men, so they can return to their families.

Posted by craziequeen at 09:12

Good Lord1 I tell you, we live in such treacherously crazy times...that this GOOD MAN is now facing death because he believes in PEACE! HELP!!!
I love that you included this in your Advent...I was unaware of these people and their very serious situation...

I know, I was bitchin' to myself in the car because my bus didn't turn up, so I had to drive, which means I have to leave my car at work 'cos it's Christmas Party Day!

and the news came on the radio and shamed me. There I was, moaning about a bus when this poor man is facing his own execution.

I've heard about this on the news over here because two of the hostages are Canadians. We can only hope that these men are fortunate enough to get away with their lives. It makes me sick to the stomach to see what this unnecessary War has caused.

So much needless pain and suffering.

The scary thing is that Old Old lady of the hills didn't know anything about it? Surely this is being reported in the US, I hope so and that she just happened to miss it?