Yesterday I saw my first honest to God case of Road Rage. I was not directly involved, but nearly got hauled in because I was behind the Rager. 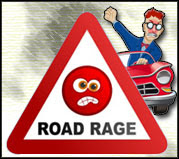 We have dual carriageway in built up areas which, unlike rural roads, can have speed limits as low as 40 or even 30 miles an hour. The road I was on has a lot of sliproads and entry ways and has a speed limit set at 40, so those driving on through stay in the outside lane. This means you get people wanting to plough on through at speed and the other, more law-abiding folks, who stay in the outside lane at the correct speed.

So, there we were. Miss Law-Abiding, tootling along in the outside lane at about 39 mph. Behind her, Mr Law-Breaker, is sitting on her bumper waving frustratedly at her. Behind him is good old cq, heading home after a long day.

When she saw a suitable opportunity, and obviously aware of the gesticulating male behind her, Miss Law-Abiding pulled into the left lane, to allow Mr Law-Breaker to go on through.

At which point I couldn't believe my eyes. Mr Law-Breaker, in his red Seat Altea (perhaps the wife's car!) suddenly veered in front of her and slammed his brakes on with about an inch to spare. I pulled ahead, not wanting to be caught in a pile-up or make the situation worse. In my rearview mirror I could see him yelling and screaming at her, waving his fists and leaning across his car. He put his car half way across the dividing line, hence creating a barrier to both lanes, and then slowed right down to about ten miles an hour holding back all the traffic.

Realising that being distracted so was causing my driving to deteriorate, I concentrated on the road and drove home, thinking over what I had just seen.

I admit, I get impatient on the road, I curse slow drivers and inconsiderate drivers. I get annoyed when I see people not paying attention, using mobile phones, fiddling with satnavs or even personal grooming (I have seen drivers shaving, women combing their hair and even men reading the paper while driving!).

Then I thought, who was the real bad driver in this whole affair? Miss Law-Abiding who, although mildly annoying, was only obeying the law. She was keeping to the speed limit, driving safely and was aware of her environment. Mr Law-Breaker was rude, abusive, inconsiderate, drove dangerously, threatened and risked innocent people's lives while he let his temper loose.

Have you seen or experienced road rage?

There is always someone who will always want to go faster that even the speed limit allows and its those people who are most of the problem.

There are others who are to scared to even drive the speed limit who stay in the fast lane pissing everyone else off.

I think the biggest cause of road rage is time.
People are in such a hurry they loose their tempers but when you tell them they should have started 30 minutes earlier all they could say is why should I, why shouldn;t everyone else speed up.

Have a nice weekend

In Delhi, it is a daily affair. Road rage is something we see all the time. Too mant traffic and tempers are short.

I have seen people coming into blows. Once one person tried to run the other .

Got here from Michele...

Unfortunately by driving in the right lane and leaving the left clear 'Miss Law-Abiding' is clearly ignoring the law. Drive on the left, overtake on the right. It is simple and also what is required of us all if we want to use the road system. This is not optional, it is the law.

By driving on the right 'Miss Law-Abiding' created the situation that frustrated the driver (who sounds like a prat anyway).

The reason the speed limit is lowered is so people can take account of traffic on the roads to the left by adjusting their speed, not their lane.

Important lesson to be learned here. Do not sit in the outside lane, forcing people to undertake or get frustrated behind you.

I live in Atlanta which was, not too terribly long ago, named the #1 worst place to drive in North America. The Roads are horrible, the speed limits are poorly planned and the people are rude and obnoxious all the time. You never get a wave from someone who cuts you off, there is rarely ever a timely stop at red lights or stop signs and you always know that at any given moment you could lose your life. Roadrage is RAMPANT here. It is not uncommon in Atlanta for any one who is not traveling with you to wish you good lock before you get under way.

It's a scary place to live. I can't wait to go back to Virginia. Hairpin turns and mountain roads I can deal with, but scary people...well...scare me.

Michele sent me to say hello.

i saw two asses on the road last night, and one accident

Oh my gosh! That is just so scary! That women should press charges, that drivers actions were wayyyy over the limits of normal behavior. Thanks for giving folks a wake up call!

Quite often, and I wrote a whole blog post about it too. It's amazing that more people aren't killed on the road. Glad you are ok!

Thank goodness you're fine. I've seen this too often, and it frightens me to the core each and every time.

As you may remember, I was a road rage victim a few years back. I was riding my bike when a motorist who wasn't paying attention to his driving almost hit me. After I yelled out to jar him into awareness, he ended up getting out of his car and assaulting me.

I memorized his license plate number, the description of his car and every last detail about what he looked like and was wearing, then quickly called the police on my cell phone.

Bottom line: he eventually plead guilty to assault, got one year's probation, a ten-year ban on owning a firearm (thank goodness for that!) and a criminal record. I'd give anything to watch him try to cross the border now.

Unfortunately, road rage seems to be an everyday occurrence here in BC. Drivers don't pay attention to those around them, and there are always those assholes in their huge trucks who think they own the road.

By this time, the person behind is usually at boiling point, but like Jeff says, they stick to the rules of the road, or they cause an accident and get to explain to the cops exactly why they felt the need to ride our bumper in the first place.

I think I've only actually witnessed it a few times, but I witness over-agressive driving all the time (I feel this is right below actual road-rage). People are scary, it's all you can do to stay out of the way!

I see it occasionally, usually people pushing too close to those in front. Its particularly noticeable when its a van with a company name along the side. Major reputation damage too.

At one point I found myself getting more and more angry at slow drivers. Then I had three 'a-ha' experiences: one was finally passing a slowbie and realising that the driver was really old. I felt ashamed of my impatience, because I know people's reflexes get slower as they age and I can understand why a truly old driver needs to drive slowly and cautiously, and hell, I'd like to be cut some slack when I get to that age. The second time I simply had the thought come into my mind that I have no right to be angry at someone who is obeying the speed limit. And the third was the realisation that the biggest cause of my road rage was NOT the other drivers, but my tendancy to run late or misjudge how long a journey will take. I was creating my own stress and then expecting other drivers to fix the problem by clearing the road for me. Crazy.

Nowadays I do little more than mumble under my breath occasionally. That kind of anger is just unhealthy.

Oh no... I've never seen road rage like THAT! I live too close to Washington DC... where road rage consists of guns and death. I do like to drive fast though - I admit it - I DO! And I have gotten impatient behind slow drivers. BUT... I have a LOT more patience for SLOW drivers than I do for poor drivers - the ones who have a hard time staying in their lane, or the ones who like to switch lanes every other car length! Those are the ones who make me realize where road rage comes from!

But in your scenario, I also got wondering if this man and this woman might "know" one another... and maybe they were involved in a "fight" before they ever even hit the road!? Could be...

Here in Los Angeles we see an abundance of it I'm afraid....And people take out guns and Shoot Other People, in their Rage! I have not seen that with my own eyes, but I know it happens because we hear about it on our local news, all the time....! The Rage that is Rampant here is very scary, too...as what you saw with Mr. Rager there...! Like you, I get impatient and curse other drivers, (with the windows up, I might add---Worried that someone might have a gun....) But the level you are talking about I find deeply deeply frightening! I'm glad you did NOT get caught in the cross-hairs, my dear! I just wonder where all this rage is going to go...?