I am sore and aching, with a fuzzy head........but I had a good weekend!
The castle arrangement was strange, as we weren't allowed to camp inside the castle, but pitched our tents outside and lugged everything into the castle through the entrance - which meant up the lane, through the car park, through the gift shop and then up here (follow the pink lines) up a pretty sheer incline: 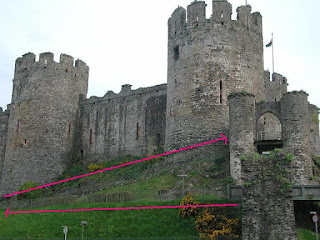 Doesn't sound the end of the world - but a complete medieval market is an awful lot of heavy wood and canvas.

I helped set up on Sunday morning and then debated what I was going to do for the day...Mr and Mrs A had lots of helpers with Mistress Vic and the three children so I was free to learn a new trade.

I watched Jonno hammer out a coin and thought 'I could do that!'. Boy, could I ever! That was a real money maker (we don't usually sell things at these events) literally (I know, cool pun!). I had a stream of children and adults at my mint wanting my 'pretty silver pennies'. The secret to hammering coins is firstly to make it look good, and secondly to make the coin with a single hit. It was a double edged die - which meant you put the blank between two moulds and hit it firmly once with a heavy hammer, impressing the mould on both sides of the coin at once. More than one hit runs the risk of double imprinting, which explains the faulty coins sometimes dug up by archeologists. The children loved the silver pennies and the theatrics, the adults were intrigued by the process and the poverty-stricken individual desperately trying to earn enough to pay for some shoes.

I could even flash my black toenail (got elsewhere!) and say sorrowfully 'I dropped the die on my foot yesterday'....they lapped it up.......several came back for more talk and more silver pennies.

The sergeant at arms made a point of spending time looking over my shoulder to ensure I wasn't forging or diddling our Lordship out of money.....that added to the appeal for the public.

The money flowed in. One child would inch shyly over and offer his money saying 'can I have a silver penny please?', so I would beckon them over and begin showing them the die and the blank coins - by then Mum and Dad would be listening attentively. One strike of my mallet and the parents would be asking for coins for the whole family!

I got used to hearing (in a strong Liverpudlian accent) 'Mum! Mum! This lady's making MONEY!'

(example of a period coin from the Web)

The company are taking the coin die to Caerphilly next month, so I'm off to research Edward III silver pennies so I can sound more knowledgeable.

Posted by craziequeen at 12:24

I am glad that you had a wonderful time.

aye, a woman who can create money, i may have to consider a proposal.

im sure you are the ONLY blog to use the word "Liverpudlian"!
So glad you had a fun time

I'm sure you really played the part well adn I bet the kids lapped it up! Sounds like you had a great time which I am glad about. Sorry you ended up feeling poorly so hope you feel better soon hon :-)

We have a posh colour photocopier don't we.... [muses]

p.s. Please tell cyberkitten I tried photocopying fivers in the posh colour photocopier for a maths lesson in school - even the kids weren't fooled (I still had them all at the end of the lesson!)

You can make me money any time you want dear...

How very fascinating CQ...Making coins! Sounds like great fun but hard work, too! I love that the children and the grown-ups ALL wanted those nade-before-their-eyes coins....It sounds like you have a new vocation! (lol)

This is a great idea. I've seen those machines on the end of piers that take old coins and squish them, but this hammer idea is fantastic and a great crowd puller too!

Sounds like you had alot of fun and learning experience for everyone.

Get daily suggestions and methods for making $1,000s per day ONLINE for FREE.
GET FREE ACCESS INSTANLY