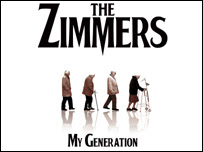 Meet The Zimmers - the world's oldest rock band which has a combined age of over 3,000.
The 40-strong troupe is led by 90-year-old lead singer Alf. 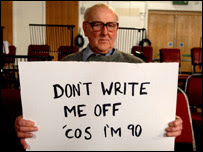 The band includes pensioners fed up in old people's homes. It is a world that feels closed off from society: a world of afternoon naps and daytime television and five o'clock suppers.
All feel isolated or imprisoned, and a few are even concerned for their welfare.
And it is not just those in the old people's homes who are cut-off.
Three-and-a-half million old people live alone in the UK. 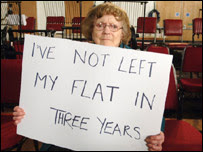 Many rely on bingo as a social activity: a staggering one in six pensioners regularly play. But the country's biggest chain, Mecca, recently announced it was closing eight of its bingo halls.
So The Zimmers also decided it was time for a trip to the head offices - a pilgrimage to Mecca - to tell the bingo bosses just how much was at stake.
But it is the charity single - released on 28 May - which they hope will make the biggest noise.
To prepare for action, The Zimmers took over the famous Abbey Road studios to create a cover version of The Who's classic song "My Generation", to show that old people should not be brushed under the carpet.
And with U2 producer Mike Hedges on board, as well as pop heavyweight Geoff Wonfor (who shot the Band Aid video), the OAPs are hoping to break into the Top Ten.
With the single not even released yet, it seems as if Zimmers have touched a nerve around the world: media from Germany, America, Canada, Iceland, Israel, France, Brazil, and Australia have all jumped on the Zimmers Bandwagon. Even Japanese GQ wanted a piece of them.
There have been radio appearances, talk shows and a gig at a London nightclub.
Pensioner power has even come to MySpace and You Tube.
The next step is to try to conquer America.
Story from BBC News: here
2007/05/02 15:50:46 GMT

I have been kindly nominated in the Blogger Legends Ball 2007 over at Zeus Excuse, himself an award winning blogger.

In the inimitable words of Wayne's World 'I am unworthy!'.......no really, I am! My inspiration is more of a legend that I can ever be, Minerva over at Womanly Parts is my Heroine, the Legend I look up to, and the woman in whose name I am completing the race.
Minerva, not only is my race for you, but also my nomination is in your name!

Posted by craziequeen at 19:52

I have supper at 5 o clock! And barely leave the house!

And I can't afford to go to bingo - where's the charity single for me?

Just lost a long comment telling you of a post I did some months back about the original American singing pensioners who obviously inspired the Zimmers. May more groups flourish all over the world like this. Down with ageism and all the other ugly isms!
Michele says hi!

Aw, that's sad. Good for them for keeping up the band!

Zeus totally rocks. Or so my cat tells me ;)

I think it's marvellous. It's always wonderful to be nominated by someone else. Congrats.

I saw the American version of this and I think it is great. I hope they sell millions!

Congrats on being nominated; Minerva is such an inspiration to everyone, both in her writing and in her struggles against the dreaded "C".

God bless your race, our dear friend, and of course, the doctors and researchers who are seeking a cure for cancer.
Good for you , and GO Zimmers!

That is so inspiring. I've often wondered why modern society so willingly writes off its most experienced members. This should beat down some stereotypes for sure.

You've always been a legend in my book. Congrats on the nod. Well deserved!

I'm out of the loop on this, CQ. I'd not heard of the Zimmers until now. I should be more sympathetic--I'm getting closer to that age every day...

Congrats on the nominations, CQ. Michele sent me over the pond to see you!

I'm glad to hear more background on the the Zimmers. Interesting group of people.

There was a story on the Zimmers here in the states. . . interesting how they can empower themselves through the use of the Internet. It's disgusting how our elderly are tossed aside by society. Here from M.