This weekend just gone the Company of Chivalry spent the weekend at our 'home turf' Farleigh Hungerford Castle in Somerset. 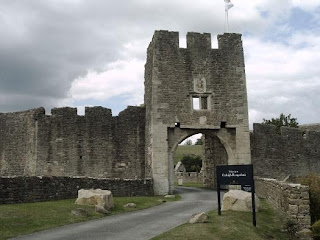 We had a fighting arena, an archery range and some living history (candle-making, woodworking, wool carding/spinning/dying and me with my coin die, making silver pennies).
We camped in the castle grounds (my tent was in the dip to the left of the picture where the railing is). In the centre of this picture is the Abbey, still intact with the Hungerford tombs. 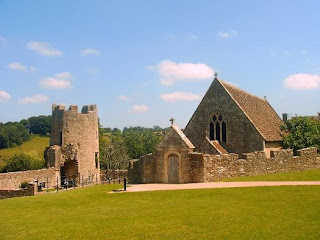 With daily shows for the public of armour, weapons, soldiers drill, on Saturday we added the excitement of a Knighting ceremony for our Lords de Beauchamp and Hungerford (jnr), and on Sunday we had an example of medieval mass (by 14C the mass was in English, which made life easier for our priest character!)

Here are de Beauchamp and Hungerford having a play session.......boys will be boys. 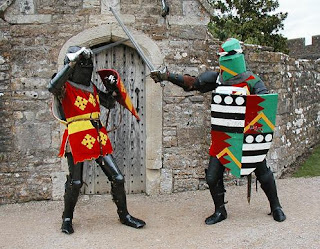 Photos of re-enactment events are really hard to find, because we can't usually take photos - what with being 14C characters and all!

And, if you're interested, here is some information about Farleigh Hungerford Castle:

Farleigh Hungerford Castle began life as a manor house built by the Montfort family. In 1369-70 it was sold to Sir Thomas Hungerford, first Speaker of the House of Commons. He converted the property into a square castle with large corner towers, surrounded by a moat. In 1383 he was pardoned for having done this without a royal licence. In the early 15th century, his son, Sir Walter Hungerford, enlarged the castle by adding the outer court that enclosed the parish church, which he used as his chapel; it is thought that he built the present parish church nearby to replace it.
The castle was home to the Hungerfords for 200 years, but had fallen into ruin by the end of the 17th century. Little remains of the main castle building apart from some substantial ruined towers, but the gatehouse and curtain wall that protected the outer courtyard are largely intact and the old parish church it enclosed is well preserved and features some medieval wall paintings and one of the most important collections of lead coffins in the country.

Next weekend, it's Caerphilly Castle!

Naomi? Nah, it rained most of Saturday and again on Sunday (although we had some dry time). This is England, after all. But weather forecasting says Caerphilly might be nice :-)

Posted by craziequeen at 21:53

The history of the Castle is fascinating....It is hard to wrap my mind around the 14th Century, and imagine that people lived there and worked there, etc....

I hope you had good crowds coming to watch all the activities....Especially you, making those coins! I love that you do that, my dear. And I am assuming this means the RAINS Stopped! Hooray!

Beautiful setting for that sort of thing.

Oh...and I hope that you are still praying for the return of Madelaine McCann. People do tend to forget missing children after a while. I pray & hope that she is someday returned safely.

I love the thought of a "home" castle. How neat it must be to have a magical place like this nearby.

BTW, I was tickled by your comment re. my waterfall pic. I'm thrilled that you'd consider using it as a backdrop. Now, of course, the pressure's on: I need to make sure future pictures are similarly worthy of such attention from friends.

Whew, I'd better get shooting now!

Hi hon, just popping by to see how you are. It sounds like you're having a good time being out and about with the reenactments again :)

I celebrated my 29th birthday today (ugh, last yr of my 20's) and the day turned out better than I ever could have hoped. Hop on over and you'll see what I mean :)

dropping by to say hello and admire the beautiful castle...
:)

Ohhhhhh HOW FUN! Oh I bet you guys have a BALL! We have been to Civil War reenactments here in the states -- and they are cool - Hubby really likes the Civil War era... but I think Castles and Knights are EVER so much cooler!!! I LOVE going to the Renaissance Festival!

Today I'm going to a Jousting Tournament! It's 95 degrees with HIGH humidity though! I'm hoping the poor jousters don't fall off their horses from heat exhaustion!

I love the second photo, it almost seems untouched by time, like -- did they actually have cameras back then to capture that? lol Gesundheit from Michele!