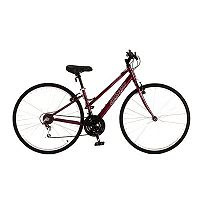 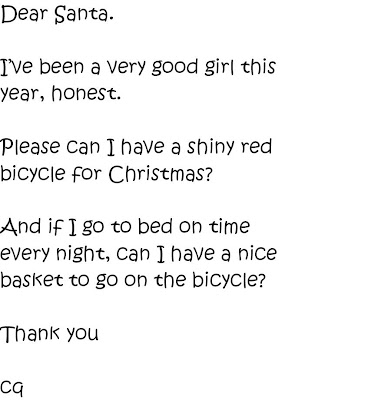 Posted by craziequeen at 20:22

Someone once told me that lying to YOU is almost as bad as lying to God! Is this true???

Listen to the good little Jewish boy from Canada: get her the bike! I don't care if you have to add an extra trailer on the back of your mythical sled, but make sure you get it through her chimney before everyone wakes up on Christmas morning.

Dear Santa,
Since my Kayak paddles came early, you may use your extra remaining charge card balance to buy CQ whatever she likes, regardless if she posts photographic evidence of her recent Misbehaviour ( note: weird Anglo spelling )
yes we know that you do not have a shop at the North pole, and that you just buy this stuff and have it shipped, it is okay, we love to talk about you anyway,
a former fan,
David

ps. Can you drop off Carmi's stuff early, like for Hannukah?

Melli is not being nice, a lump of coal will suit her just fine.

Please keep the noise down when you pull CQ's new shiny red bike down the chimney and try not to scratch up the paint.

I'll even forgo my new front tooth so she can have a basket too. Can you make it a real big one so she can carry lots of cool stuff?

Bring CQ her new red bike or ELSE.
You've got the naughty list; you know what I'm capable of.
Thanks, pops.

What a delightful read CQ!!
Didn't anybody ever tell you that Santa Clause is an old fogy though?
I was always a bad girl and yet every year there was something under the tree for me, so what's that prove?!
Hmm...Maybe if I had been a good girl there might of been even MORE under the tree?
Anyways, I hope that you DO get that shiny red bike because if you get a flat tire on it, it will be much easier to change!

Will the basket be big enough to stuff Pandora,Charlie, George and MB into and take them for a wee ride?..