[sent to me by bionicdwarf] 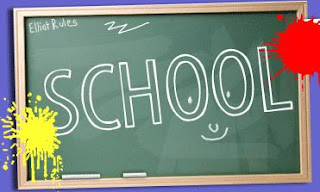 Scenario: Johnny and Mark get into a fistfight after school.
1960 - Crowd gathers. Mark wins. Johnny and Mark shake hands and end up mates.
2007 - Police are called, Armed Response Unit arrives and arrests Johnny and Mark. Mobiles with video of fight confiscated as evidence. They are charged with assault, ASBOs are taken out and both are suspended even though Johnny started it. Diversionary conferences and parent meetings conducted. Video shown on 6 internet sites.

Scenario: Jeffrey won't sit still in class, disrupts other students
1960 - Jeffrey is sent to the principal's office and given 6 of the best. Returns to class, sits still and does not disrupt class again.
2007 - Jeffrey is given huge doses of Ritalin. Counselled to death. Becomes a zombie. Tested for ADD. School gets extra funding because Jeffrey has a disability. Drops out of school.

Scenario: Billy breaks a window in his neighbour's car.
1960 - His Dad gives him the slipper. Billy is more careful next time, grows up normal, goes to college, and becomes a successful businessman.
2007 - Billy's dad is arrested for child abuse. Billy is removed to foster care and joins a gang. Psychologist tells Billy's sister that she remembers being abused herself and their dad goes to prison. Billy's mum has an affair with the psychologist. Psychologist gets a promotion.

Scenario: Mark, a college student, brings cigarettes to school.
1960 - Mark shares a smoke with the school principal out on the smoking area.
2007 - Police are called and Mark is expelled from school for drug possession. His car is searched for drugs and weapons.

Scenario: Mohammed fails high school English.
1960 - Mohammed retakes his exam, passes and goes to college.
2007 - Mohammed's cause is taken up by local human rights group. Newspaper articles appear nationally explaining that making English a requirement for graduation is racist. Civil Liberties Association files class action lawsuit against state school system and his English teacher. English is banned from core curriculum. Mohammed is given his qualification anyway but ends up mowing lawns for a living because he cannot speak English.

Scenario: Johnny takes apart leftover firecrackers, puts them in a model plane paint bottle and blows up an anthill.
1960 - Ants die.
2007 - MI5 and police are called and Johnny is charged with perpetrating acts of terrorism. Teams investigate parents, siblings are removed from the home, computers are confiscated, and Johnny's dad goes on a terror watch list and is never allowed to fly again.

Scenario: Johnny falls during break and scrapes his knee. His teacher, Mary, finds him crying, and gives him a hug to comfort him.
1960 - Johnny soon feels better and goes back to playing.
2007 - Mary is accused of being a sexual predator and loses her job. She faces three years in prison. Johnny undergoes five years of therapy. Becomes gay.

How times have changed. Our teachers used to scold us and we were better for it.

Now as a teacher, I think twice before scolding anyone.Students are a pampered lot.

Michele sent me here to vent, I think!

Thanks to rampant political correctness and government-induced paranoia, we seem to have become patently unable to set limits, deal with failures or accept personal responsibility for our actions.

I miss the simple times when society in general seemed to be more honest.

Michele does, too. Hope you're feeling better!

Would be funny were it not true, and I say that as an attorney for several school districts here in the U.S.

Thanks for stopping by my blog and commenting.

This one made me laugh the other day on email ...

Michele sent me this time :-)

It's scary how true these all are. I actually fear what my children are seeing and being exposed to in school alone these days, let alone anywhere else.

BTW - I got ski pants to fit me!! You know what trouble I have with shopping, but finally, something went right lol!

I've seen this before...sad, but very true. Where did we all go wrong?

It is funny...YET....It is also so true.....I find the dispensing of drugs to young children for all these so called "Conditions" is truly irresponsible on every level...! It's mostly to control what people don't understand and to shut these kids up. OY!

On the other hand,

In 1960 Mstr A would probably have been expelled from his first school aged 6. If lucky, he may have been offered a place in a "special" school for naughty boys. I expect that by the time he reached secondary school he would either be a drug addict, a criminal, a suicide risk or in borstal for uncontrollable violence. he would never have got any qualifications, and would have spent most of his life in and out of prison until he died in a fairly nasty way. Whereas in 2007 we had the option of choosing a more suitable school (still local, still state funded), where he has not only been encouraged and taught how to learn, but has had the assistance needed to integrate with his peers and will follow on to a "normal" seondary school, ain normal qualifications, almost certainly with good grades, and be able to contribute to society in a useful, if geekish way.

There is much that is still wrong with our education system, but given the choice of educating my kids in the integrated, well funded, socially aware schools of today or the divisive, write kids off at 11 years old, academia/manual labour oriented dual system of 1960 and I will take today's PC world any day.

Hopefully when my kids go to their career interview at 15 years old brimming with ambitions, they will not be told to "stop being stupid and get a job in the local factory until you are pregnant, it will happen soon enough" as i was!

Oh, and no-one has ever suggested that Mstr A go on Ritalin, not even when the were looking at him possibly having ADD/ADHD. I don't think the NHS is as keen on handing drugs out as the US is, too costly as all kids get free prescriptions.

That is funny but scarily true at the same time.

how funny, but how frighteningly true! :/

Ahhh..the times they are a'changin'! How true the new version has become...scary!!!! And, darn sad!

BTW, Michele sent me to say Hello, and I'm glad to see you...