I got off my miserable butt on Friday and piled my kit in my car, picked up my friend goodwife Maud of Keynsham and took the horseless cart to Caerphilly Castle in response to a call from My Lord Hungerford. 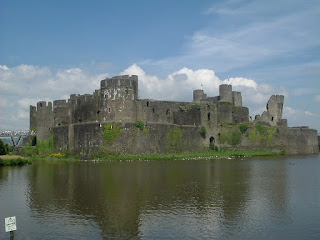 The company arrived at the Castle and tents were put up, cars hidden off site, fires were lit and alcohol was pulled out of bags.

I arrived very unhappy - got out of the car and walked straight into Goodwife Kate's arms for a hug.

Finally - a hot sunny weekend......so good we were complaining it was too hot! 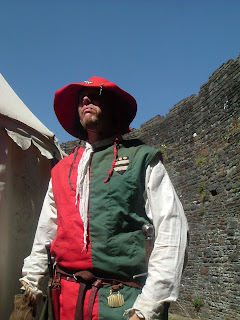 (Sergeant at Arms Little is grateful for the little shade afforded by his jaunty headgear!)

I learnt the hard way how to put up the tent......thank you Courtney!

The public were, mostly, nice and spent a lot of money at the coin die, where we hammer coins.

Now I am a Yeoman and I have two coin dies; a silver penny and a half groat. I also have two peasants to hammer coins - so I am a chief moneyer.

I finished sewing up my adjusted dress - nothing shrieks 'medieval' like a woman sitting on a stool sewing a dress.........There must be a million photos on the interweb of a middle-aged medieval woman sewing a dress....

The displays were well received and we fielded a lot of questions from the public. 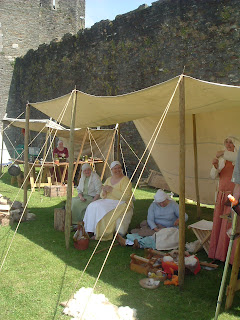 (from the left; Mistress Beatrice in the kitchen, Goodwife Maud, Goodwife Quene (me), Goodwife Beryl and Goodwife Kate)

With the nice weather we were able to have our evening fires and come together as a company over a few beers.

I got to bicker, fight, argue and wrestle with my friend Master Caunsfield - we play well together! He doesn't hold back, but he doesn't hurt me. Nice lad. 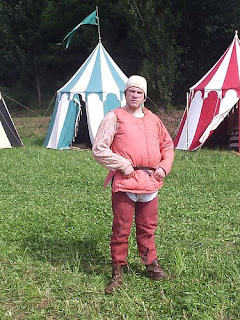 Goodwife Kate and I had a laughathon last night - something kicked us off as we lay in bed and listened to the merriment still going on around the fire - and we screamed with laughter for a good twenty minutes. Master Caunsfield put his head through the door to see what was going on, which set us off again. 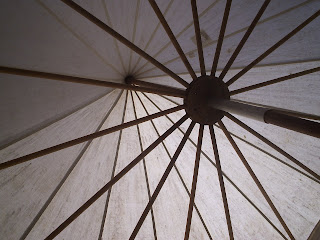 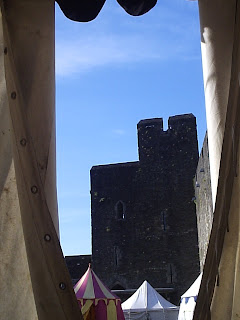 [Additional photos from Dawn Davies - pictures added as they arrive...]

Posted by craziequeen at 08:12

It's about time you had some good weather for this sort of thing!

I'm glad you had such a good time. You deserve it! There are times when the 14th century seems a lot more real than the 21st!

Sounds like it was EVERYTHING a weekend is meant to be! Healing, refreshing, and FUN! I love that bottom photo too!

Sounds like a good weekend! I caught the sun a bit :)

Glad it went well. We managed to sell stuff:)

fantastic. I love all the jolly banter that you describe

Now that sounds like just what you needed!!! I love the photos!!

I love when you take us along on your adventures. Wish I could witness the fun for real someday. I'd doubtless have my camera in hand.

Speaking of which, the tent pic is a masterpiece of composition and light.

i really love your writing style, very remarkable.
don't give up and keep penning considering it just worth to read it,
impatient to see a lot more of your current content articles, have a good day ;)