Sunday again. Dinner done, just got the ironing to do and put the clothes away and then it's Monday and the whole 'week' thing starts again.

Today's Person may come as a bit of a surprise to most. He does not fit into the normal Craziequeen People mould. 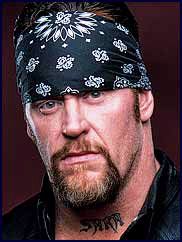 This roughhewn Texan is The Undertaker. He has been a stalwart of the World Wrestling Entertainment for 16 years, and was the main reason I watched every week for ten years; to get a look at the Taker, the American BadAss, the man who danced with the devil weekly at 9 (the last one is mine, do you like it?)

But behind all the 'entertainment' is the man, Mark Callaway. 44 years old, 6'8", 300lbs, married with children. Like all wrestlers throwing themselves off the equivalent of small buildings, Mark has battled substance and alcohol abuse. He has recovered from hip and knee surgery and is only now considering retirement.

I found this quote in an article;

Without exception, his peers describe him as a locker room leader, a veteran extremely generous with his time and experience. "When he says it's his yard, it really is," says Edge (Adam Copeland). "Backstage, you KNOW that he's the man."

His legacy encompasses not just his skill, agility, size and longevity in the world of professional wrestling, but his reputation as a genuine leader among his many peers. As much as the fans will remember the many faces of the Undertaker and his enormous contribution to sports entertainment, it seems that the locker room will remember Mark Callaway, the man, even more.

Posted by craziequeen at 19:50

What a good choice CQ. I have never thought of , or heard of him referred to like that before.

now I know you are nutty!
michele could kick his butt!

I don't go much for wrestling. I find it so brutal. I know it is only a game but it's brutality to me,.

Whatever rocks your boat chickie. Just thought you should know right now I am trying to get tickets to a sneak preview of Pirates 2 will let you know how I get on LOL

Oh wow, I never knew he was 44! You certainly wouldn't think it looking at him and how fit he is.

I don't mind Undertaker at ALL. But I still like John Cena more lol.

He looks tough...wouldn't like to see him upset since I am only 5'2 and reach 120 lbs only when I go skiing with lots of clothes on! I am back, but since this is a world cup-free zone won't say more :)

Overall, I've heard the Wrestling Guys and Gals are really tight friends who will help one another in dire circumstances, which is cool!