My Tribute is to Khang Ngoc Nguyen. A man who escaped the deprivations of war in Vietnam to a new world, where he was cruelly taken in a new kind of war. 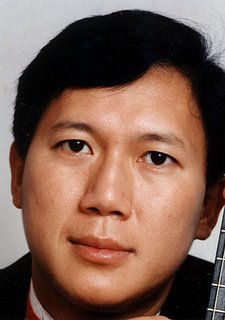 Khang Nguyen grew up familiar with war. In South Vietnam, he and his family heard the frequent boom of shells and gunfire. Once, a mortar shell fell on a house across the street from his home, killing their friends inside.
In 1975, when communists took over the country, he and his family fled to an airport in vans. His father and two of his siblings made it onto a flight to the United States, but the rest of the family got left behind amid the chaos.
Nguyen, his mother and other siblings lived in poverty, peddling rice on the streets. Meanwhile, his father, a former employee of the U.S. Information Services in Vietnam, used his contacts to find the family.
In 1981, the parents and nine children were reunited in Washington.

Family members said Nguyen relished his newly ordered, stable life. He earned a bachelor's degree in electrical engineering from the University of Maryland. For 13 years, he worked for the Defense Information Systems Agency at the Pentagon, and during the past six months was a systems administrator for a Navy contractor.
Nguyen, 41, loved working at the Pentagon and would buy hats and T-shirts with government logos. He devoured books on the military, particularly about the Vietnam War.
"This is our second native country. We have gotten so many opportunities," said his wife, Tu Nguyen, 38.
When the Pentagon arranged for Khang Nguyen's car to be towed from the parking lot to a relative's driveway, family members said that his son, An, jumped up and down, pressing his face against the car windows, looking for his father.
"He was lucky; he was born here," Tu Nguyen said quietly. "He never suffered any pain from the war. But now he is 4 years old, and he has lost his father."
[from the Washington Post memorial page] 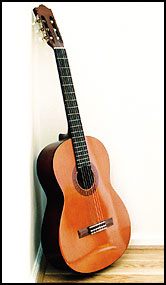 “This guitar was my husband’s dearest friend. Playing it was his greatest passion. Growing up in one of the poorest countries, [Vietnam], he had to sacrifice all his meal allowances to buy his first guitar and played beautifully since he was a teenager. ... The sound of Khang’s tunes flowed through our house and through my heart. When I was feeling down, his music lifted my spirit. He always hoped that he would teach our little son, An, to play the guitar. Now, just like his Dad, this guitar has become An’s buddy. Sadly, Khang cannot be here for An’s music lessons, but his songs and his music will live forever in our hearts.”
Tu Nguyen, wife

Khang was a wonderful man, from what I have read of him. Admired and respected by his colleagues, loved by his wife and son. There is no more a man can ask for - except the long life to to enjoy these things. Khang's life was cruelly cut short at 41 (the same age as me).
And it would appear I am not alone in admiring this man:
"I worked with Khang when he was an engineer at the Defense Information Systems Agency. He was a caring, responsible individual with a great love for this country. He is missed."
*** Posted by Colonel Michael McCullough on 2005-08-23 ***

I noticed Tu talked about Khang's love of playing his guitar. so I attach by way of tribute to Khang, Tu, An and all the victims and families of 9/11 a piece of music:

to all those who lay awake (and those who still do!) at 3am thinking of their loved ones.

Follow this Link to the Pentagon Memorial site. All the more poignant as I work in the UK equivalent of the Pentagon! 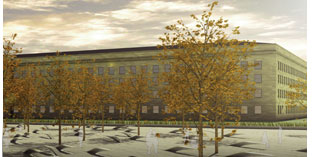 When I'm gone from your side,
And all your tears have been dried ...
Do not stand at my grave and weep,
I am not there, I do not sleep.

I am a thousand winds that blow;
I am the diamond glints on snow;
I am the sunlight on ripened grain;
I am the gentle autumn's rain.

When you awaken in the morning hush,
I am the swift uplifting rush
Of a quiet dove in circled flight.
I am the soft star that shines at night.

And when you stroll in the evening hours,
And smell the aroma of beautiful flowers;
There'll be no need to sob and cry ...
I am not there, I did not die!

All the victims of 9/11 will live on in the hearts of those they left behind.

Dale's blog has shut down under the weight of comments, but click on this link to see all the participants (thanks for the cache, Raggedy!)

Posted by craziequeen at 23:55

Very beautiful tribute. Well done. See you on the 11th.

Such a moving tribute to a wonderful peaceful soul. My own husband was a guitar player and part of what I miss most with his passing is not hearing him play in night as I drift to sleep. My heart goes out to Khang, to his family and all who loved him. The world is a little smaller, and quieter with him gone. Rest in peace Khang.
Blessings,
Auntie Lyn

This 2,996 Project has been such a wonderful thing to be part of, hasn't it? It brings it all home in a much more personal way. One cannot help but cry and feel some little bit of the loss that each of these peoples families and friends still feel, and will feel, forever.

Very beautiful and touching tribute to Khang Ngoc Nguyen!
What a terrible tragedy. I am so sorry for all 2996 victims and their families. Thank you for sharing this touching memorial.

OMG! We picked the same poem!

Oh well it's a good one. Your tribute is beautiful! Wonderful job!

CQ - The first line stole my heart and moved me to tears. - To think that humans are capable of destroying other humans and doing so in the name of god brings compassion to my heart.

Anyone that is not affected so by your post should be concerned for their soul.

Thanks for joining in the tribute. - GBYAY -

Thank you for sharing his story with us..

My thoughts and prayers are with his family and all the other families as the 5th Anniversary of 9/11 approaches.

You may visit my tribute at:

Cq honey, you did him damn proud!

What a wonderful wonderful tribute. It's been an amazing thing to have played a small part in this fantastic gesture. Thankyou for telling me about it.

My tribute is also up and posted.

What a great tribute! Thank you for sharing him with us.

My tribute is up too.

What a wonderful tribute - the poem was a beautiful addition to Mr. Nguyen.

That moved me to tears. Beautifully done. Thank you!

Opening sites with tribute makes my heart bleed and brings tears to my eyes as I see all these young people losing their lives to something beyond their control. These cruel people who caused the tragedy just didn't care about these innocent lives, lives with yet unfulfilled dreams, lives who may have been depended upon by their loved ones.
My sympathy goes to all the victims' family of these Sept. 11/2001 tragedy. My heart will always have a special place for all of you.

Thank you for your beautiful tribute. I'm really getting to "know" more people than I ever had through this tribute and it makes me proud to see so many filled with love to honor their memories.

My tribute is up for Harry A. Raines.

you are so wonderful and thoughtful!!!!

The Meezers or Billy said...

Very beautiful. What a tragedy for this family - thinking that they were safe from war and horror.
My tribute is posted at the Meezers blog - Meezers Mom Mary

Wonderful tribute!
These are sad and hard to read....
I am honored to be a part of this project.
Mine is posted also...
The ultimate measure of a man is not where he stands in moments of comfort,
but where he stands at times of challenge
and controversy. ~Martin Luther King, Jr.

Very touching CQ! Had sad to think that they thought that all war was behind them.
My tribute is up at 'our' blog.. www.lonestarpurrs.blogspot.com

Lovely. I'd be honored if you'd read my tribute, too.

Oh my - such a sad story. You've truly honored this man with your words. Thank you.

This is one of the most moving tributes I've read all day. I don't even know what to say here... Thank you for sharing his story.

joy in knowing that the GOOD of humanity shall outwit and outlast the bad. It has to be that way. God blees you for this fine tribute!

What a wonderful tribute. Thanks for sharing. You wrote a moving piece.

Beautiful, so beautiful. Sad, so sad. The story of the guitar just tore me to pieces.

This was a beautiful tribute. The guitar story is so poignant.

Very beautiful Tribute to Khang Nguyen. Thank you for helping me learn more about this man and his life. God Bless all the families that have loved & lost.
My Tribute is to James F. Lynch.

A beautiful tribute. Thank you for keeping his song alive.

How tragic to survive one war only to be one of the first victims in another.

Wonderful job. Thank you for this tribute.

Lost but not forgotten.

Thank you, your tribute was beautiful.

I did not know any victims, but I learned a lot about my asigned person. His tribute is on my blog.

9/11 is what compelled me to re-join the military and do my part.

What an incredible story. Thank you for writing this. I'm glad to have gotten to know Khang a little bit.

Thanks for stopping by to help me remember Thomas Patrick Farrelly.

Beautiful tribute, QC. And thanks for pointing me in the direction of this project...via Michele.

I'm making my way through the 2996 blogs. This one has brought tears to my eyes. I'm honoring Nancy Carole Farley and Jeffrey J. Shaw. Please visit.